The man behind some of the most iconic sports cars of recent vintage has gone green. Henrik Fiskerbuilt his reputation designing the BMWZ8 and Aston MartinDB9 & V8 Vantage. The Z8 and the V8 Vantage both have the well earned distinction of being Bond cars: appearing as the ultra-classy 007’s tricked out rides in the James Bond films.

Fisker has since decided to venture out on his own and bring exquisite luxury design to environmentally friendly vehicles. Fisker Automotiveis a joint venture that combines Henrik’s world-class vehicle design talent with Quantum Technologies‘ plug-in hybrid electric propulsion systems. The result is amazing karma…

The Karma is Fisker Automotive’s first model, set to be released  in the summer of 2010. It’s a plug-in hybrid electric vehicle(PHEV) with a wide, low stance and a 50 mile all-electric range before the traditional gas engine kicks in. This green car packs a punch, though, doing 0-to-60 in under 6 seconds and reaching 125 miles per hour.

The Fisker Karma’s driver can choose between the quite, efficient “Steath Drive” and the powerful “Sport Drive” with only the flip of a switch. Regenerative breaking recaptures breaking energy, like in a traditional gas/electric hybrid. 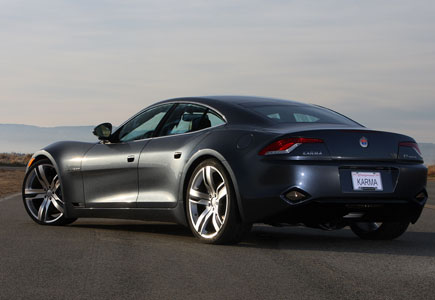 Fisker points out that 60% of Americans and Europeans–the portion whose daily commute is less than 50 miles–could potentially only need to fill their gas tank once a year with the Karma. On top of the environmental sustainability aspect of using electrical power instead of gasoline, one tank a year is also financially attractive. Electric power ends up fueling your car for the equivalent of only a few cents a gallon. Of course, if you’re buying an $87,900 sports car gas money probably isn’t a concern…

Environmental sustainability doesn’t stop with the Fisker Karma’s performance. An optional solar panel on the roof helps fuel the car and maintains the temperature when the car is parked. PHEVs are not always emissions free even within their all-electric range due to fossil fuel’s heavy use in producing electricity, but with the Fisker Karma you can drive truly emissions free by offering to package the Karma with solar panels for your house.

It’s interior also incorporates several eco-friendly features. Bamboo fiber is used for the “EcoChic” interior, while the “EcoSport” interior uses “leather from a partner with a 100% sustainable manufacturing strategy.” The car’s glass is recyclable, and the wood trim comes from sustainable sources: “fallen trees,” “rescued trees,” and “sunken trees.” 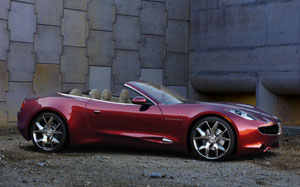 If you’ve got $87,900 burning a hole in your pocket, Fisker is in the process of developing a retail network which is set to start off with 39 locations in 24 states and the Karma can be pre-ordered online.

While the Fisker Karma is truly a beautiful machine, Fisker doesn’t plan to stop there. Future models will feature the same Q Drive drive-train created by Quantum for the Karma, and the patented Henrik Fisker design skills.

Fisker Automotive was recently granted a $528.7 million loan from the federal government to develop fuel-efficient vehicles. 68% of that money is for Project Nina: Fisker’s next PHEV, which is expected to retail for about $39,000 starting in 2012.